After Berlin, we finished off our trip with Paris, France. We were there for four full days, but  we didn’t see a whole lot due to the holiday lines  (tower for Notre dame was estimated to be a 4 hour wait!). This morning I want to share with you our pictures of the Eiffel Tower. 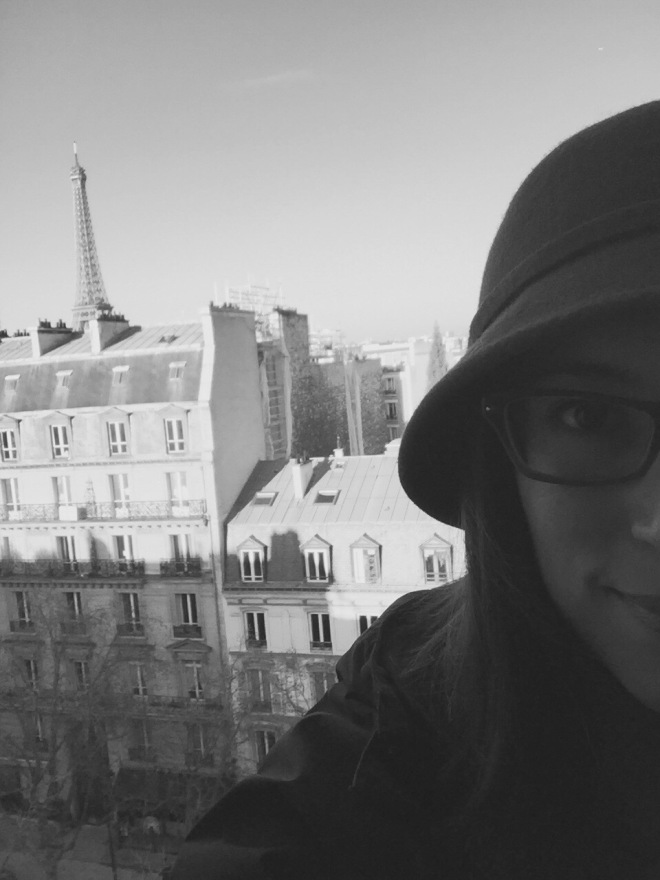 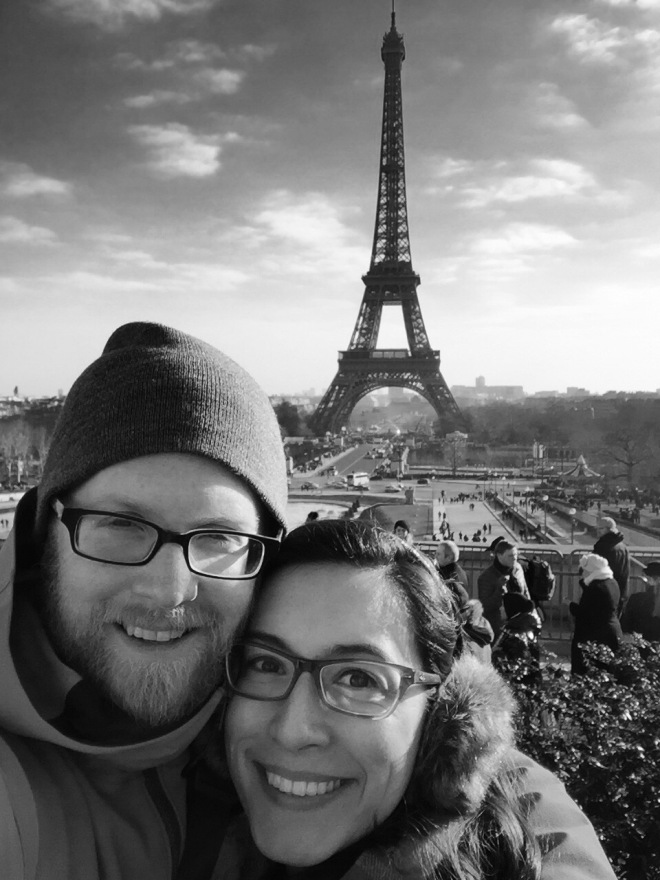 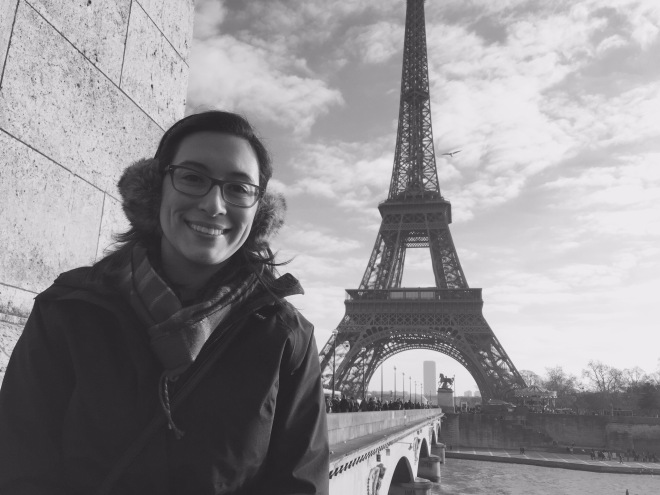 Someone was REALLY excited when we finally made it to the top!
The very tip-top floor was closed, but we were able to walk to the level below that. We planned on going ice skating until we realized how tiny the arena was- definitely more kid-friendly than adult-friendly.

Have a lovely day my friends~

If I could describe Berlin in one word during our stay is would be…COLD. At one point it was 21 degrees Fahrenheit outside and that was the general norm during our brief stay. Because of this, we decided to fill our days in Berlin with museums galore to protect our bodies against the bitter cold. We bought the Museum Pass (€48 for two passes, 3 days) and went to the following museums/attractions: 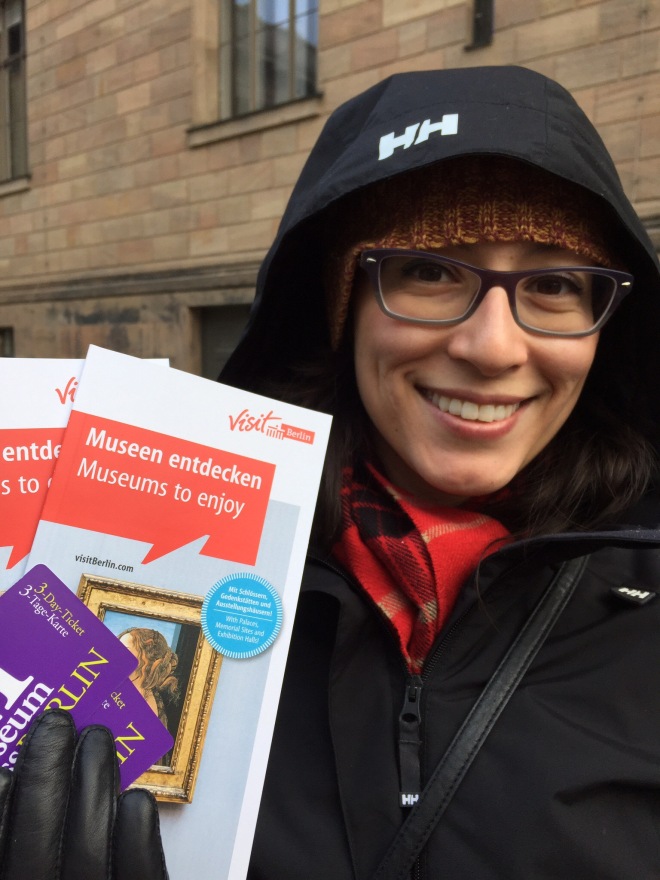 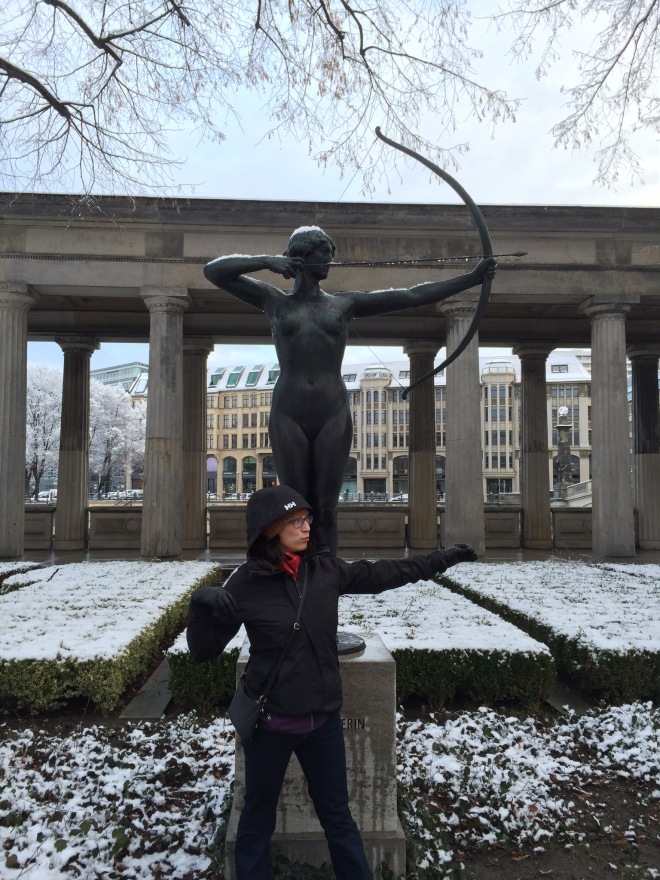 I went here 8 years ago when I was in high school and loved the Greek exhibit. I raved about it and Sam really wanted to see it too. As I was walking through the museum I felt that the door that led to the Greeks had been blocked off. It wasn’t until we were done I realized I was right. They are renovating that entire wing of the museum till 2025!

Berliner Dom
One of my favorite attractions in Berlin was this old, gothic church. I first mistook it for a Catholic church, but during the tour found out it was a protestant church. It was destroyed in World War II, but was renovated by the soviet’s with the funds provided from West Berlin church leaders. 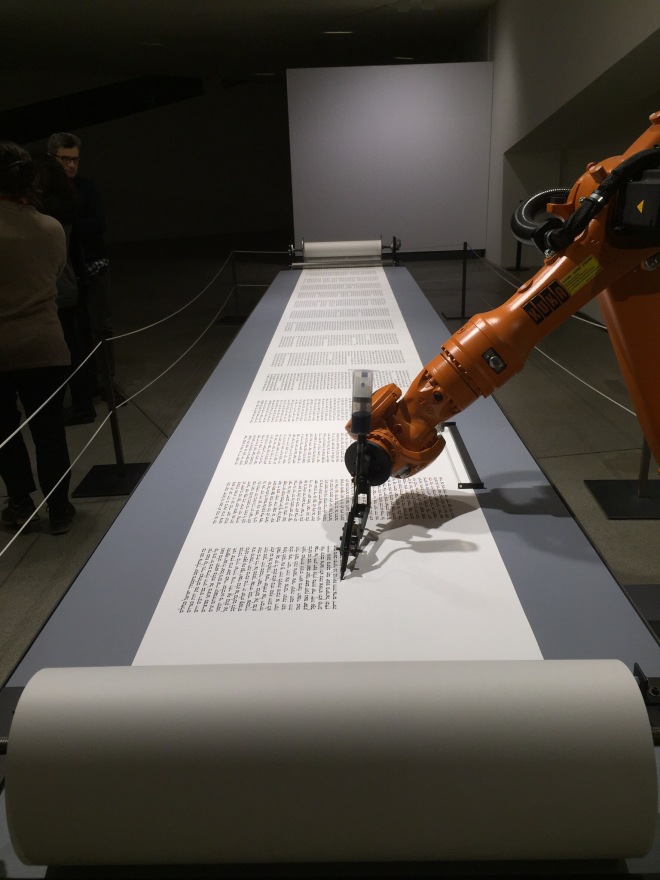 Jewish History
Brandonburger Tor
Checkpoint Charlie
Rathaus
I saw this while we were on a site seeing bus. My recommendation: these buses are not worth the cost. You will see much more of the city on your own two feet, so wear good waking shoes. We took the local transportation to make our way around.

Viking Exhibition
This is one of the things Sam was dying to see. It was during this exhibition that Sam determined we would visit the Fjords next. After all this cold though I really want to go somewhere tropical. However, a trip to Norway doesn’t sound too bad. 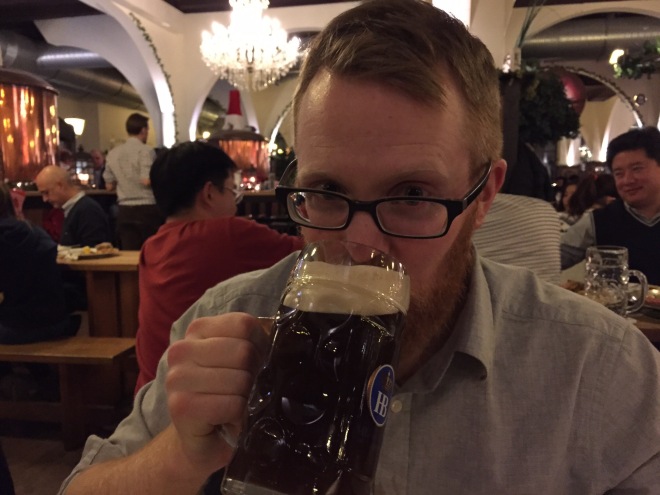 Our pedometers told us we had nearly walked 20 miles the two full days we were there. It’s a large city with so much history and so many things to see. Additionally, we had some really good grub too. We went to the Hofbrau Haus (again) and I have to say I like the Munich location better, but admire the calmness of the Berlin location. We didn’t have to search 20 minutes for seating, but inside were seated by an employee. Berlin is famous for their currywurst and we definitely got our fill! I felt a little homesick for Thai food and we found one near our hotel. It was a tiny little restaurant that was dimly lit, but had amazing, authentic Thai food.

Have you ever been on vacation for the holidays? This was my first time, and although I missed my family, it was refreshing to get away from the stress of the commercialized American Christmas.

﻿﻿Christmas Eve we started off by visiting the Art History Museum. No words…this place was exquisite! They even had a café in the middle of the museum where we had a quick lunch and coffee date . We spent the majority of the day exploring this museum and spent the rest of the day wandering around. Eventually all of our walking led us to St. Stephens Cathedral. 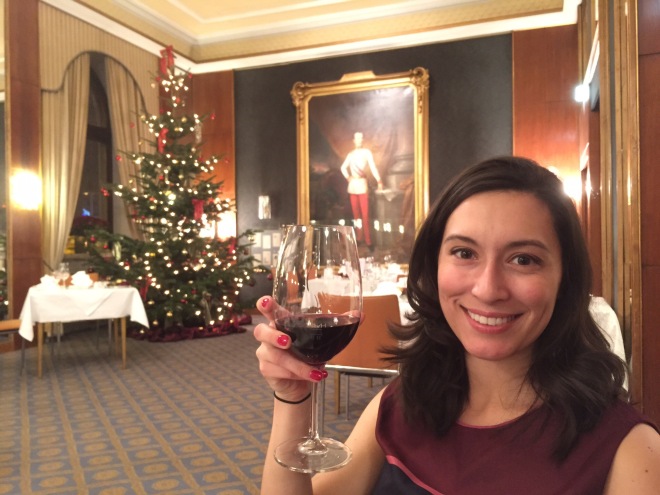 ﻿﻿Around 5pm we returned to the hotel and got all fancied up for our Christmas Eve dinner. The dinner was served in buffet style and we ordered a bottle of wine to celebrate the occasion. I wish I could have taken more pictures, but I didn’t want to be seen as the “rude American”. We gorged ourselves on dinners with a round of appetizers, main courses and dessert. The dinner as a whole took about 2 hours- very relaxing and my kind of meal.

To end the night we attended midnight mass at St. Stephens Cathedral. I was dismayed to find that even the service was bit of a tourist spectacle. People were videotaping and taking pictures. It was absolutely insane and I wish people had more reverence. On the other hand, the ceremony itself was beautiful and they provided English translations of most of what was said. We meandered back to the hotel around 2am, tired but excited to return to Germany the next day! 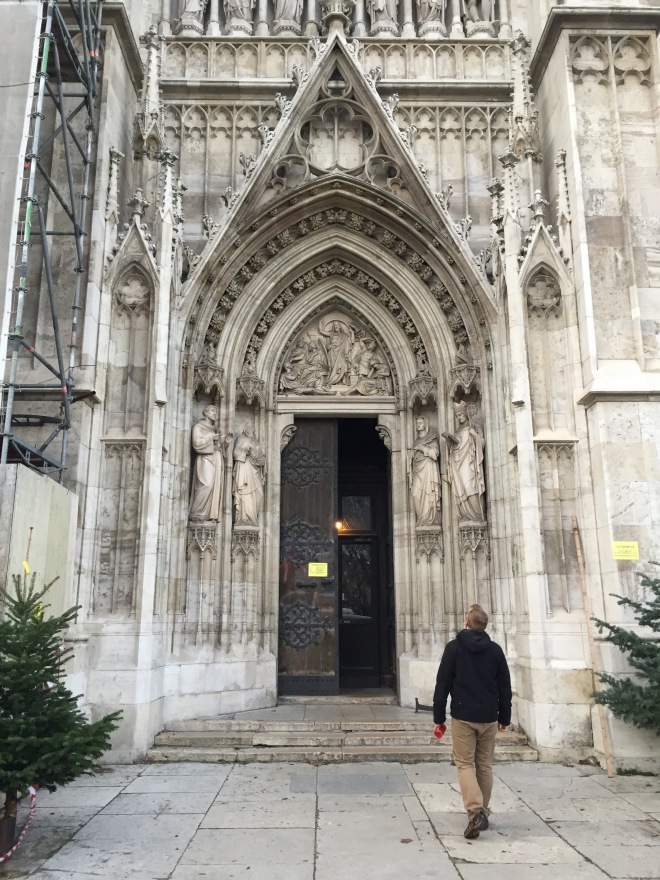 I don’t know if you know this about my husband, but he’s a travelling extraordinaire! He’ll visit a country he’s never been to and know exactly where we are, exactly where we need to go and how to get between A and B.  He has an uncanny sense of direction. At first the idea of train rides was terrifying (getting lost, getting on wrong train etc), but now I feel confident in my train-hopping abilities with him by my side.
Anyway, we took a 4-hour train from Nuremberg to Vienna and arrived on a gorgeous, sunny day. We checked in to our hotel, dropped off our luggage and went on a search for coffee.
Back home one of our favorite coffee houses is heavily influenced by Austria. Their menu has traditional coffee drinks and also has that European feel. The last time we got coffee we noticed this advertisement about Café Lindtmanns in Vienna and we were determined to visit!
Café Lindtmanns was really elegant and the wait staff was wearing suits and nice attire. We decided to just stick with coffee and dessert, apple strudel naturally. Afterward, we took a stroll through the large Christmas market. We had then been to markets in Munich, Nuremberg and Austria and they all had the same vendors and goods, so we didn’t spend too much time exploring the market, however, we got another glass of Gluhwein and a tasty tomato soup bread bowl. This was my first time to Vienna and I am forever smitten with this city. 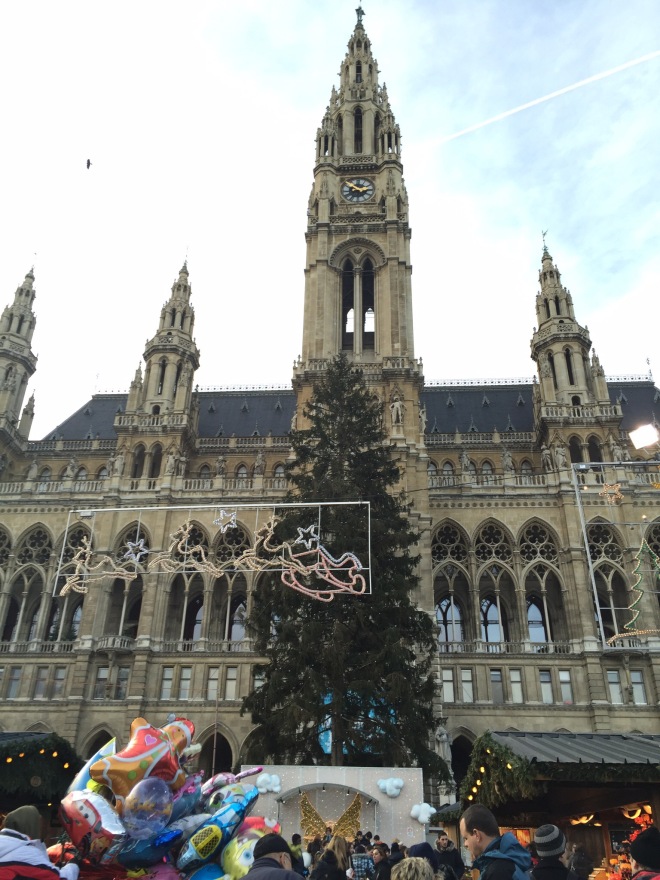 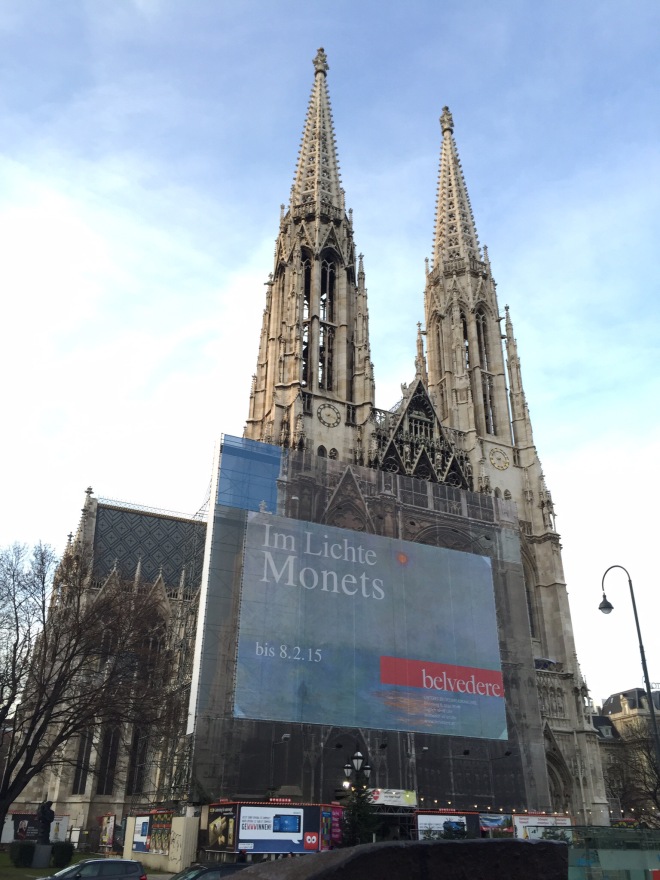 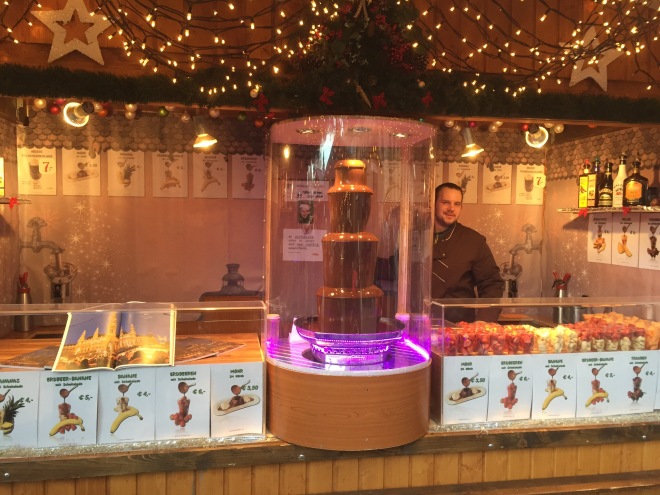 What a weekend! Samuel and I had an amazing time in Vancouver, but wow is it good to be home. The best thing about our little getaways is that it makes me more appreciative about the abundant blessings I do have. Do you feel the same way? It seems no matter the length of time there’s always a piece of me that’s homesick. I’m such a homebody!

The morning after Valentine’s Day, Samuel had reservations for breakfast and boy was it delicious!

WHAT WE ORDERED: I ordered the Irish stew breakfast. It was a beef/lamb stew served in a personal size cast iron skillet with potatoes and veggies. Samuel had the typical potato and eggs breakfast with some fried pork belly on the side.

RATING: ⭐️⭐️⭐️⭐️
Food was amazing and atmosphere was rustic and relaxing. 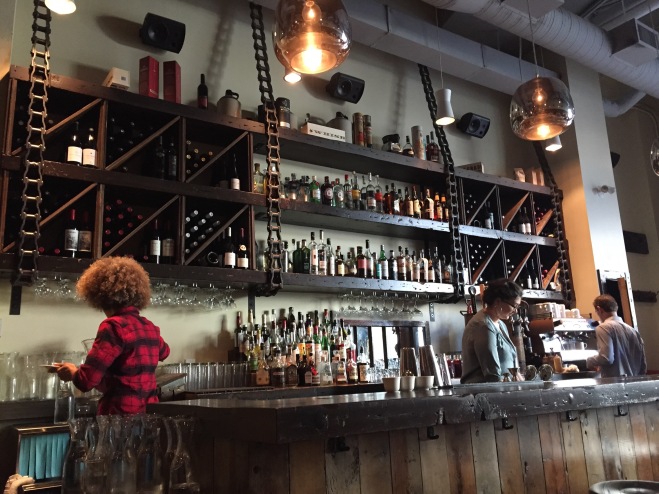 Afterwards we took a bike ride around Stanley park. I loved seeing the totem poles! It was sunny that day yet very brisk, so we had to layer up. The ride was lovely and it made me excited for spring to arrive so we can go on more bike rides at home.

For our last night we splurged and went to Seasons at the Park for a nice prime rib and salmon dinner.

SEASONS AT THE PARK

WHAT WE ORDERED: crab-stuffed salmon for me and the prime rib special for Sam. We ended the meal with the best lemon pie ever!

RATING: ⭐️⭐️⭐️
The view is what gives this place most of its pizazz. The food was decent and the dessert was my favorite part. 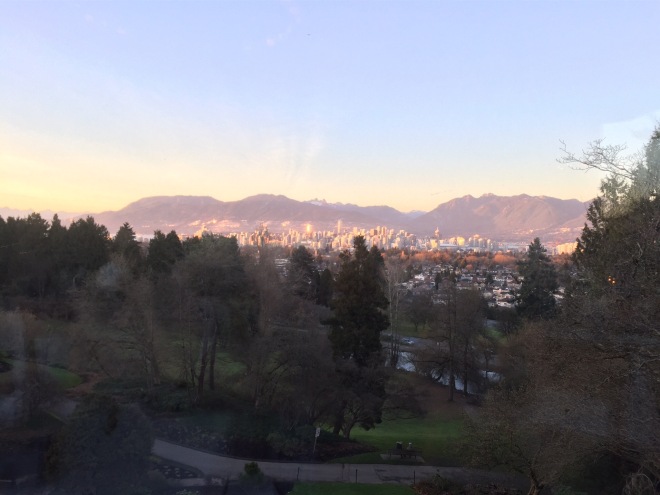 While I’m not pregnant, all my close friends and family are having babies left and right. With so much cuteness around it’s no wonder my baby board on Pinterest has a bazillion pins. One thing I’m absolutely in love with right now is the Peter Rabbit theme. Isn’t this nursery idea darling?

Who’s feeling the love? My tummies feeling the love. My husband sure knows how to make this woman happy. We are on a foodie adventure in Vancouver, BC. We’ve experienced some delicious cuisine so far and we are not done yet! Samuel has two reservations for us tomorrow and I can’t wait. Today was the official Valentine’s Day and we celebrated with Whole Food smoothies and Theo chocolate. It was simple and perfect. Tomorrow our adventure will continue, but I wanted to first share some foodie pictures with you before I fall asleep.

WHAT WE ORDERED: naturally the currywurst (I got mine with mayo and green onion added)

RATING: ⭐️⭐️⭐️⭐️
Music was a bit louder than most restaurants I’ve been to, but food was delicious and the feel of the place was fun/quirky.

WHAT WE ORDERED: I got the liege (soft & sweet) fruity waffle & Sam ordered the crunchy chocolate mousse waffle. We went here for breakfast and I wouldn’t recommend it early in the morning (beware: upset stomach), however coming here for dessert would be an excellent idea. It’s a busy, small place with limited seating so act quick when a spot becomes available!

RATING: ⭐️⭐️⭐️
I’m not a fan of waffles or sweets for breakfast, but it’s still worth a try! 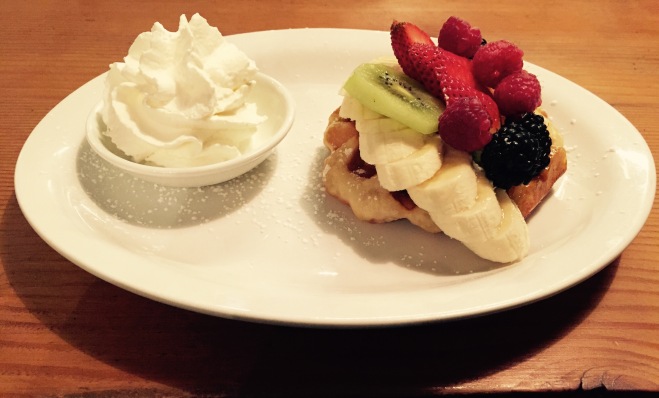 WHAT WE ORDERED: we both ordered the special, which was the teriyaki beef sandwich with sake mayo, scallion daikon and toasted sesame. The last time we were here we ordered the porchetta and it was killer!

A Woodsy Muse
Blog at WordPress.com.